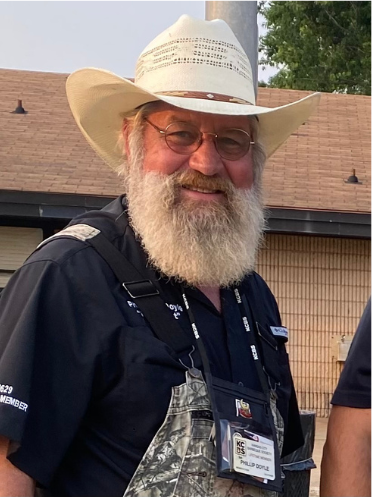 1 - Why do you want to be a member of the KCBS Board of Directors?
I run my own successful business with the aid of my wife Julie. Though primarily self-taught with no formal training, I have extensive experience in managing services and sales, scheduling workload, accounting and budgeting. Over the years I have managed and executed projects ranging from multi-million-dollar investments to basic service work.
My experiences have taught me that the most important thing needed to succeed, regardless the task, is to have the right people and proper resources in place to successfully execute any project large or small. I believe the experience and knowledge I have gained over my life and career provide me with the tools needed to effectively represent KCBS, it’s members, and it’s mission.


2 – Identify the major areas (Cook, Judge, Organizer, Rep or Backyard Cook) in which you are involved.
I am a Lifetime Member, Certified BBQ Judge and Certified Table Captain. I have competed in the BBQ world since 1984 and received two invitations to “The Jack” along with numerous local contests over the years.
My primary focus these days is organizing the International Goat Days Championship BBQ in my hometown of Millington TN each September. Julie and I have been the primary organizers for IGDCBBQ since 2015. We also aid starter contest on organizing and executing an event. We welcome the opportunity to share our knowledge and experience with others in hopes they have a successful event.


3 – Identify your major short-term goal and the major long-term goal, if elected to the Board of KCBS and your plan to implement change or improvement in order to carry out each of these goals.
“If it ain’t broke, don’t fix it”. KCBS has done a fantastic job over the years of creating and maintaining an amazing organization, but we need to direct focus on the future of the overall organization.
Short term I would like to see KCBS build upon the support system for all aspects of the organization. Being proactive in making sure our events are structured correctly and executed according to KCBS values. This includes everyone from our Contests Reps, Organizers, Teams, CBJ’s and CTC’s. Making certain we are giving them all the tools needed to succeed. The first part in that is to determine the challenges we face today as a whole, and then work to develop a support system that addresses them effectively and efficiently.
Facilitating and executing CBJ and CTC classes in areas that have low representation. It is more important than ever to make sure we have an adequate pool to pull from. Contest organizers can do everything possible, and teams can come to compete, but if there are not enough CBJ’s or CTC’s, what did we gain?
Long term we must focus on and invest in our future. Where are we today, where do we need to be next year, what do we want to be in 20 years?

4 – The KCBS Board of Directors is a working board that spends 10-20 hours and possibly more per month in furthering the mission of KCBS depending on your role as a member of the board. If elected, please explain “Your level of Commitment, Time, and Energy” in your role as a director.
“You got to be in it to win it”
I make no bones about it; I have a lot of irons in the fire these days and wear a lot of different hats. With that said, I don’t take responsibility lightly and if I don’t think I can rise to the occasion, I don’t take something new on. I look forward to the opportunity to represent KCBS, its members and mission.

In all honesty and to be fully transparent, if I had not received Julie’s blessing on this, I would not be typing right now.

5 – List how you have participated in KCBS and for how long?
I became a member of KCBS in 2007. I am a Lifetime Member, a Certified BBQ Judge and Certified Table Captain. I have competed in KCBS sanctioned contest, judged more contest than I can remember and served as table captain at others.
I have competed in BBQ competitions since 1984. I co-chaired the Variety Children’s Charity BBQ Bash for many years and along with Julie, have organized the IGDCBBQ since 2015. Both Variety BBQ BASH and IGDCBBQ were and are KCBS sanctioned events.

6 – What skills do you possess that might help the KCBS Board of Directors in its mission, i.e., Accounting, Legal, Marketing, etc.? How do you see using these skills as a KCBS Board of Director member?
From 1997 to 2007 I served on the BoD of the American Fence Association. I held the office of Secretary, President-Elect and President in 2006.
During that time and still today, I have served on numerous committees and am a two-time recipient of the “Outstanding Committee Achievement Award”.
I served from 2007 until 2009 as the founding chairman of the AFA Operator Installer School. I remain an instructor for the school to this day.
I have traveled the country promoting membership in the AFA and continue to provide training and motivational speeches to promote Professionalism in the industry.
Over the years I have received numerous peer awards for my volunteer roles and am an inductee in the AFA “Hall of Fame”.
As a member of the AFA BoD, I played a key role in the creation and facilitating the associations mission statement, strategic plan, annual budget, staffing negotiations, bylaws, policy and committee tasking.
I still maintain a presence in the national, but also serve currently as the secretary/ treasurer of the Memphis Tri-State Fence Association, a chapter of AFA.