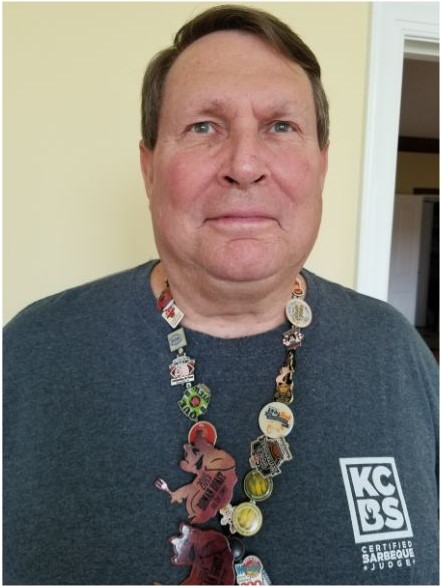 1 - Why do you want to be a member of the KCBS Board of Directors?
I must first give credit to Randy Bigler and Myron Berry. These two gentlemen are my inspiration.  Both men have set a great example of stepping up to the responsibilities of giving back to an organization that they greatly enjoy by serving on the Board of Directors of KCBS.
I believe that the KCBS Board of Directors should be a balanced board of organizers, reps, cooks and judges so everyone's interests are represented at the table. Right now, judges are under-represented on the board. They say that judges don't vote, so I'm calling on all KCBS judges to step up and vote on January 2 - 16, 2023.
I love the sport of competitive bbq competition. I initially got into KCBS, for the enjoyment of great bbq but stayed with it for the people I met and continue to meet who soon became part of my extended bbq family.
Now, after belonging to KCBS for 10 years, I've judged and participated in over 150 bbq contests. It's now my time to step up by serving the men and women of KCBS and giving my time, energy and skills back to the great sport of bbq which has given me such enjoyment. As a KCBS Board of Director I want to see us continue to grow and prosper as an organization.

2 – Identify the major areas (Cook, Judge, Organizer, Rep or Backyard Cook) in which you are involved.

I am first and foremost a judge. I have served in most duties inside the judging area, but my most enjoyable moments are spent judging. I love great food, and especially great bbq. Biting into that perfect 180 chicken, rib, pork or brisket is a joy and one of life's great pleasures. I am not a cook but I have assisted cook teams and been a turn-in runner for the cooks. Each contest I attend is a bbq family reunion.

3 – Identify your major short-term goal and the major long-term goal, if elected to the Board of KCBS and your plan to implement change or improvement in order to carry out each of these goals.

If elected to the Board of KCBS my major goal will be to always represent the interests of each and every judge in KCBS. I liken our KCBS organization to a 3-legged stool, with the cooks, judges and organizers each being a leg and the reps being the seat that each leg attaches to and holds everything together. Now, remove just one leg and the organization collapses. We all are important to the continuing success of KCBS.
A major goal of mine is to increase the support to organizers. We, as KCBS, can do much more to help new contests and existing contests be successful.
I would like to see KCBS bring back a national bbq tour, much like the Sam's Club tour we had.
Another long-term goal is to increase support, promotion and emphasis of international bbq contests. Our world is large and we have lots of areas of growth for KCBS.

4 – The KCBS Board of Directors is a working board that spends 10-20 hours and possibly more per month in furthering the mission of KCBS depending on your role as a member of the board. If elected, please explain “Your level of Commitment, Time and Energy” in your role as a director.

I have served on several working nonprofit Board of Directors including the Masonry Institute of Tennessee, our state trade organization, Leadership Putnam Board of Directors, later becoming the LP Board President. I also served many years on the Board of Directors for our local United Way, as well as several years on the Board of Directors of our downtown redevelopment program called Cityscape. I also served several years as President of the Board of Directors of Quit 4 Life, a volunteer nicotine cessation organization. I am currently serving on the men's leadership group for my local church, Crossroads Community Church in Baxter, Tennessee.
I have received several awards for service and volunteerism over the years such as JC Penney's Golden Rule Award, the American Lung Association's Tennessee Volunteer of the Year award, our local hospital's Fred H. Roberson award for 25 years of volunteering, our local county's Volunteer of the Year award and others. I say this not to toot my own horn but to show that I have a heart for serving others. As I said earlier, it's now time for me to give back to the sport of bbq and KCBS by serving as your representative on the Board of Directors. I am passionate about KCBS and completely committed to the continuing success of our organization. I love Carolyn Wells and the last thing that I want to do is to let her and the KCBS founders down. Being currently retired gives me all of the time needed for pursuing my interests and passions. I'm also blessed with great health.

5 – List how you have participated in KCBS and for how long?

I am a Certified Master BBQ judge and a lifetime KCBS member. My participation has been in the judging area where I have enjoyed over 150 contests. I have done most duties in the judging area including turn-ins, table captain, judging and grazing table duties. I have been a member of KCBS for 10 years.

For 20 years prior to retirement, I was the owner of a successful commercial masonry construction company. Being a small business owner is a lot like playing quarterback; you need the right skills, experience to call successful plays, ability to handle stressful situations, drive to take risks, and great vision.
I am blessed with having general business skills. My skills include setting goals, creating plans for achieving them and then efficiently executing strategies. As a small business owner my job duties also included protecting against liabilities, securing contracts and managing projects.
As the owner I was tasked with planning and overseeing the growth and operation of my business. This includes setting short-term and long-term goals, defining corporate vision and determining company objectives.
A crucial part of my time was spent acquiring new and constant business. Other duties included directly meeting potential and existing clients.
Construction company owners must wear many hats, and project management is another critical expertise I honed.
I am skilled in communication. As the owner I was the liaison between any and all clients of a project and the workforce and different trades on the job site. A successful project requires communications between all stakeholders of the project as well as the workers executing it.
One of my most important areas of expertise is managing finances. My duties included creating and overseeing the annual budget, overseeing "The Books", directing payments such as employee payroll and payments to suppliers.
Managing and executing all of these above-mentioned responsibilities are important skills I possess. That said, apart from balancing priorities, making tough but educated decisions, and having a valuable hand in all aspects of business, running a successful company is about being a leader. To be a good leader, having a vision is necessary, but the capacity to translate that vision into reality is what makes a great leader. Leadership, I believe, is my strongest skill.