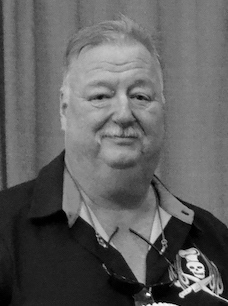 1.  Please describe the skills you possess which would make you an asset as a board member, in dealing with the challenges facing KCBS, and give an example of how those skills would serve the KCBS board of Directors and its membership.

I’ve owned and operated a graphic arts advertising agency since 1995. Before that I worked in IT, specifically large systems installation and support plus website integration and support. This career path has taught me deadline management, customer support skills, critical thinking abilities, problem solving skills and interpersonal skills. In addition to my professional skill set I’ve been involved in KCBS for over 10 years as a cook with my own team (Aporkalypse Now), a judge and administrative experience inside the tent. In short, I’ve seen and experienced all aspects of KCBS contests.

2.  If you are a Cook, Judge, Organizer, Rep or Backyard Cook, please identify the major KCBS issues concerning one of the areas in which you are involved. Describe the major issue, your strategies to correct or improve the issue and what you see as the biggest challenge to the success of your plan.

The biggest issue facing KCBS is the decline in Master Class team participation. Teams are cooking less or dropping out altogether with no “feeder system” in place.  The jump from Backyard to Master Class is large and expensive. KCBS needs to implement a middle step to assist Backyard teams and to reward teams that don’t cook 40+ contests a year.   We already have the system in place to reward smaller cooking teams, we just need to implement it.

I propose a multi team (one Master Class and 3-4 Backyard teams) points chase where the team’s member ToY points are combined to create a Master/Backyard points competition throughout the year. Organizers would be brought in by siting the team groups together when possible to allow the Backyard teams easy access to their mentors within the rules.

How do we pay for these programs? Until we can find corporate sponsors, we institute a one dollar drop per team per event to fund the prize pools for the teams.  While this seems like another form of team self-funding it’s a way to get the programs off the ground and show potential sponsors their success and sponsor exposure potential.

3.  Identify your major short-term goal and the major long-term goal, if elected to the Board of KCBS and your plan to implement change or improvement in order to carry out each of these goals.

In the short term KCBS needs to be more “public savvy” While the secrecy of the judging process is important, KCBS needs to embrace sponsors and provide a public “face” to sponsored ancillary events. An example of this was the Turkey Smoke challenge we participated in during the DC BBQ Battle. This should have been a public spectacle event with internet interviews of cook teams; public access judging; showcases of team entries with associated media coverage. These types of events are where KCBS can shine in the public eye vs just another closed white box behind closed doors.

In the longer term KCBS needs to create and promote some media personality teams who would be willing to go spread the word at local sponsored events then work with event sponsors to utilize those teams.

I will spend the time required of me in order to help grow KCBS.

5.  Please describe your previous participation in KCBS activities and years of experience.

I started as a judge over 10 years ago then began cooking. In addition to judging and cooking I have spent many contests working and assisting the reps and organizers of various contests.

6.  Please explain why you want to be a member of the KCBS Board of Directors.

I feel this is a watershed year for KCBS; with the decline in television coverage KCBS needs to work harder to not only keep its existing members but also pique the interest of the casual BBQ’er and the general public. I feel my experience and ideas fit this challenge and I want to help the organization grow.
Our Best of the Best